Shallow heap
The amount of memory that is consumed by one object. An object requires different amounts of memory depending on the operating system architecture. For example, 32 bits or 64 bits for a reference, 4 bytes for an integer, or 8 bytes for an object of type "Long". Depending on the heap dump format, the size might be adjusted to provide a more realistic consumption of the JVM.

Retained Set
One or more objects plus any objects that are referenced, directly or indirectly, only from those original objects. The retained set is the set of objects that would be removed by garbage collection when an object, or multiple objects, is garbage collected.

Retained set of X is the set of objects which would be removed by GC when X is garbage collected.

Retained heap of X is the sum of shallow sizes of all objects in the retained set of X, i.e. memory kept alive by X.

Generally speaking, shallow heap of an object is its size in the heap and retained size of the same object is the amount of heap memory that will be freed when the object is garbage collected. 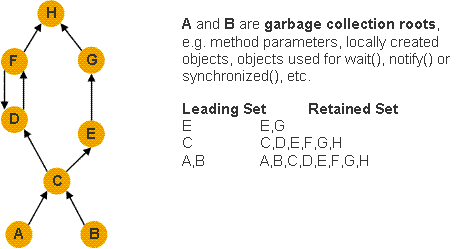